V-Zap™ devices utilize a novel pulse wave which causes little or no nerve stimulation and is essentially pain free. Testimonials attest to its effectiveness with stings from wasps, bees, fire ants, and recluse spider bites. Early field testing with snake bites in Ecuador have been successful.

Because this device has not been evaluated by the government or other regulatory agency, no claims can be made – but the patents and anecdotal record speak for themselves.

The V-Zap™ 21 is a unique electronic, venom-neutralizing instrument which, per world-wide anecdotal evidence, safely and painlessly disrupts the effects of insects, scorpions and snakes in a few minutes. It is an ideal first-aid for medical assistants, bee-keepers, lawn maintenance, jungle habitats and pest control personnel and for any person who may not be in easy-range access to competent medical care.

Using proprietary technology, two electrodes are applied around the wound site. With a couple of button pushes, the Model 21 Pro’s venom-neutralizing protocol is painlessly executed in minutes. A novel electrical signal is conducted through the victim’s venom-injected fleshly tissues using either plug-in, metal electrodes (for insects) or via sticky patch electrodes for scorpions and snakes. The venom’s molecular structure may be electrically disrupted rendering it neutralized. The body’s immune and repair systems can then naturally begin the healing process while further medical care is sought. If the V-Zap™ is applied soon after the bite, then, in susceptible persons, an anaphylactic seizure may have substantially reduced symptoms. Itching and other discomfort from a bite is typically eliminated in moments after use per anecdotal reports.

Ticks and mosquitoes can harbor life threatening pathogens such as Lyme, West Nile virus and Cell-Wall Deficient pathogens. Anecdotal evidence has shown that these health threats can often be mitigated by the application of special high energy electrical pulses shortly after the pathogen is injected by the pest. To be an effective electronic sterilizer, the waveform energy must pass though the infected fleshy tissues and be both “high” and irregular so that pathogens cannot “adapt” during treatment. The Model 21 uses a novel electrical energy waveform which achieves all of this plus it is essentially painless. While no promises can be made, it is believed that most (cell-wall deficient) pathogens can be disabled if the e-Sterilize protocol application is made shortly after a bite. – An ounce of prevention is worth a pound of cure ! 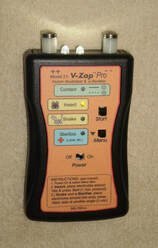 In one recent user experience, a Florida recluse spider bite on the back of the left leg calf was discovered one week after a tall-grass excursion. The wound was black, concave, necrotic 3/8ths inch diameter with surrounding redness and growing. Application of the V-Zap™ was performed per protocol. Only a slight tingle was perceived during application. Healing became obvious thereafter and within six weeks (with sterile dressings applied) it was completely healed with only a slight brown blemish left. For more successful user experiences, Click Here

A Short History About Electrical Venom Neutralization:
With a rich history of over 50-years of development (Ref: Patents: 2,771,554; 3,991,770; 4,292,980 and 5,074,305; 5,496,356; 5,755,757; 5,792,211), this novel device (patents applied for) improves upon older stun gun technology where high voltage electrical pulses were demonstrated to disrupt venom protein’s ability to sting and devour flesh. Utilizing recent developments in bio-electric technology, the V-Zap™ may disrupt many pathogens and long-chain venom proteins without the painful stun-gun affects. In persons with a healthy immune system, the body then disposes of the neutralized toxin naturally. After any serious bite, competent medical care should be sought. For more history of world-wide use, Click Here

Operating Protocol:
* Power On: slide switch to right; then a Self test  is made (battery, lamps, etc.) and the Menu for Insect is initialized.
* Insect protocol: Press the START button to begin an automatic one minute Insect protocol run;
thereafter, another one-minute run in a different position is suggested.
* Snake protocol: Press the Menu button to select Snake protocol and then
press the START button to begin an automatic three minute run.
Additional runs thereafter in a different angular position or farther up the limb is suggested.
* E-Sterilize protocol: similar to the snake protocol but uses an anti-pathogenic electrical wave. (see Manual) 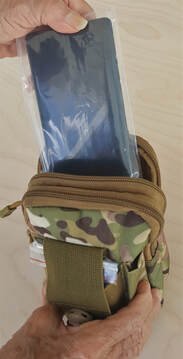 “It works for you or we buy it back” guarantee. See details at Guarantee page