How V-Zap™ Technology Compares to others

There are many low-cost products and home remedies to treat common stinging insects such as flies, bees, chiggers, wasps, and mosquitos. For example there are “instant” heat-probe devices which pack quite a sting of their own and suction devices which attempt to suck out venom. However, there is almost nothing which has shown fast, painless neutralization of more serious venomous bites from recluse and black widow spiders, scorpions and snakes. The V-Zap™ treatments stand in a class of its own as shown in the nearby chart. Does it cost more? Yes – but wouldn’t you rather have your investment actually work? It is helpful to compare the bite treatment pain experienced to length of time the treatment takes to be effective. For instance, the heat-probe devices, which do NOT work on venomous spiders and certainly not snakes have quite an “ouch” as the ceramic heating element gets very hot but for only about 5 seconds- an acceptable pain for long term itch relief. The suction devices, as suggested in the nearby plot, require quite a bit more time to extract the itch and may not be effective if not used immediately after the sting. Once again, the V-Zap™ insect-mode technology is essentially painless and takes as little as one minute to be effective. Anecdotal reports tell of success even a day after the bite ! see Success Stories. 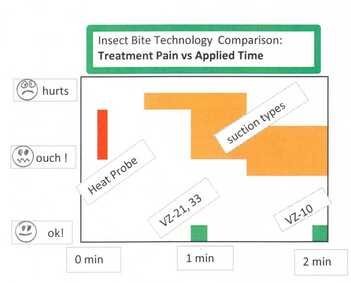